19 replies to this topic

For years, the Lich King had been dormant, sitting on the Frozen Throne, encased in a cold shell of ice. After the defeat of Kel'thuzad in the Plaguelands, the Scourge and thusly its domain lay in dead silence, too. Northrend, a harsh land that only the bravest of the brave would dare to explore that sat atop the Northern reaches of Azeroth. Well known for the harshest, worst winters and deadly cold, the frozen north is a place of many mysteries and legends.

With the defeat of The Betrayer, Illidan Stormrage, and Kil'jaeden the Deceiver, the soldiers return home just in time for hell to break loose on their  homes and families. The plague of undeath swept through major cities and ports like a tide of death, taking their toll on local populace while many struggled to fight it back. Their struggles, however, were rewarded as they were succesful in pushing back the Scourge. With this assault averted, the two Azerothian behemoths, The Horde and The Grand Alliance, as well as many smaller, less significant factions, turn their eyes to the cold north. The wrath of the Lich King has been felt, and if they would not act, it'd only continue and undoubtedly raze all of Azeroth. The decision has been made, the heralds sent out into streets. The drums and trumpets of war thunder across the realm of man and orc, tauren and elf. Families are parted once again as men and women of Azeroth are put onto ships and headed north. To take fight to the Lich King, and to hopefully end the vile Scourge once and for all.

The brave and valiant Highlord Bolvar Fordragon, a man respected and looked up to all over the Kingdom of Stormwind and perhaps even the other kingdoms, had volunteered to lead the Valiance Expedition into the Frozen North, closely followed by Halford Wyrmbane of the 7th Legion and other experienced leaders.

As for the Horde, a strange choice to some more sceptical members of the Horde, yet a very inspiring one for others, the son of the great hero, Grommash Hellscream, named Garrosh, has been chosen to be the head of the Warsong Expedition into Northrend. The young orcish warrior, an uncorrupted one, has little experience with the Scourge, which is quite obvious for he comes from Outland, but, with him, comes the great Varok Saurfang, a veteran of many wars, and a very respected warrior in all of Horde.

News spread like wildfire, the Kirin Tor had unveiled their long-kept secret. Dalaran was magically rebuilt, relocated to Northrend where it now floats above the frozen continent as a bastion of hope for all the soldiers and foolish, or brave, adventurers who may ever need a sanctuary.

Less concrete news speak of something else, however. They speak of a strange happenstance in the Plaguelands, that an old weapon of the Light, capable of destroying the Lich King, has been recovered from the hands of the Scourge. Wheter true or not, a simple citizen may not know, but it gives soldiers more hope for survival. With these news, however, arrive undead horrors from the Scourge. Or, much rather, formerly of the Scourge. The so-called Knights of the Ebon Blade claim to have been freed from the Lich King's dominion and have seemly woved to fight the Lich King. Yet, many who have seen them remain sceptical, and they are likely not to be trusted any time soon...

As soon as Stormwind and other cities of the mighty and glorious Grand Alliance have recovered from the wrath of the Lich King, the orders were given. As army recruiters headed from village to village, many young men and women were promised grand benefits for participating in the fight against the Scourge. Atop of those, many old, experienced veterans from the Third War have seen this as an opportunity to avenge their fallen friends and family. For the less millitant side, many hopeful settlers from less friendly areas of the Kingdoms have decided to aid in the building of a foothold in Northrend, primarily in the Borean Tundra.

The Campaign of the Grand Alliance would occupy itself with whatever storyline there is in the voted zone, and then continue further on into the story of Wrath of the Lich King from the ALLIANCE point of view.

The fury of the Horde was unleashed. There was no other way to describe it, truly, as the outcry for the blood of the innocent and the dishonorable tactics of the Scourge has been heard from all sides of the community. Nearly all of working ships for the Horde have been commisioned into the army, including zeppelins, and thousands of Horde warriors were sent out to the sea. Under the command of young Hellscream, the orcs were extremely bolstered in their morale. The Blood Elves and Forsaken saw this as an opportunity for revenge, and the Tauren and Trolls followed out of many different reasons. The enemy would know not to mess with the family that is the Horde...

The Horde campaign would occupy itself with whatever storyline there is in the voted zone, and the continue further on into the story of Wrath of the Lich King from the HORDE point of view.

A brave or insane adventurer, a Crusader of the newly formed Argent Crusade. You have travelled into Northrend not under the orders of the Horde, nor the Alliance, but on your own or on the will of the Highlord. There is not much to say about you otherwise. You can only hope your life will not be short, and if so, your death will be just as short. Who knows, mayhaps you will be able to return home with gold and glory?

The Neutral campaign is very flexible as it can either occupy the story of the Argent Crusade in Northrend, or many other neutral organizations, even custom ones if such is voted, as they attempt to aid in the fight against the Lich King.

The Western Valliance Expedition and the Warsong Expedition have found themselves in a rough spot as they landed on the western shores of Northrend. The Borean Tundra is a rather hostile place, and to make it worse, it seems the Nerubians have many tunnels underneath it, too. The quarry around Warsong Hold was quickly overrun, and the Horde was forced to defend their fortress in a very bizzare siege. The same had happened on the Alliance side, as the beach was suddenly swarming with the Nerubians and the village supporting keep was overrun with undead. Both the factions have put up a solid defense, and a brave one at that... But, the clock is ticking. Will they be able to survive?

Unknown to them, there was more than one conflict in the region. The Aspect, Malygos, had gone mad and begun abducting mages. This, of course, provoked action from the other flights and the mages of Kirin Tor, a response that soon blew out into a full scale war. From now on, it would be known as the Nexus Wars, but would there be anyone left to chronicle it, or would the mad aspect succeed in his quest to drain arcane from Azeroth, and into the Nether?

As the forces of the Hand of Vengeance and the Eastern Valliance Expedition landed on the shores of Northrend, they seemed to have stumbled upon a relatively peaceful land. Valgarde, which was still standing from Arthas' expedition, was standing under the shadow of a strange, ancient keep that none seemed to be able to access. The two factions quickly settled into making more outposts out in the fjords, not suspecting much aside from scourge attacks. Yet, they found themselves surprised. No longer dormant, the ancient giant race known as the Vrykul emerged from their keeps and fortresses and descended upon the two factions like a hurricane. What they first thought to be an easy landing turned into a nightmare as the Vrykul ambushed them from both the ground and the skies on their drakes. To make matters worse, unknown to the Alliance, a part of an Alliance fleet had crash-landed near Vengeance Landing and is in the process of slowly being wiped out by the treacherous Forsaken...

Even more mysteriously, the Explorer's League had begun having problems with their quarries being taken over by strange Iron Dwarves that seem to be rather hostile towards everyone. What are these dwarves, and why are they here? Will they be able to uncover these mysteries? More importantly, will they have the TIME to do so, with all the asssaults of the Vrykul??

OOC: I have put a poll to the thread. It is a multiple choice poll, so please vote for your preffered idea and leave a response! 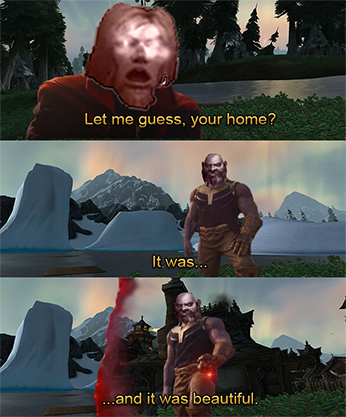 The Grand Alliance will prevail once more in our Vindictive Campaign against The Lich King's Stronghold of Icecrown!

What the fuck are you campaigning for. Who's Swiftfeather and why is it on this post

I love Borean Tundra fuck all of you

Borean Tundra will always be a more interesting zone compared to Howling Fjord, which is literally only found interesting because it's undead humans with plague vs Vrykul with some scottish-esque music in the background and some old-modeled Worgen to the north. Borean Tundra has Saurfang, Garrosh, Human settlements with militia fighting back against townsfolk taken by the plague and turned into ghouls, and it has a crashed necropolis (not to mention Kel'thuzad fucking *laughing*).

I rest my case.

Though the best place to start out is undoubtedly where Arthas landed in Dragonblight.

FIGHTING IN BLIZZARDS FOR THE GLORY OF THE LIGHT.

Though the best place to start out is undoubtedly where Arthas landed in Dragonblight.

To be honest the problem with that is that the shores are haunted by a litteral legion of ghosts.

To be honest the problem with that is that the shores are haunted by a litteral legion of ghosts.


Somebody call the Ghost Bustas...

Somebody call the Ghost Bustas...

That is fair. I mean, it is insane, but it could be attempted, at least.. Hm.

relevant and not in a clique

Somebody call the Ghost Bustas...


The onslaught was the Crusade's second attempt to invade Northrend, and it failed just like the one before it.

Anyone up for a third?

relevant and not in a clique

The onslaught was the Crusade's second attempt to invade Northrend, and it failed just like the one before it.

Anyone up for a third?

Nah the Onslaught still exists. All we gotta do is pick up the pieces.

For the Horde! Our might will rid the world of the Scourge!

Back to Drunken Squire Tavern

Also tagged with one or more of these keywords: Proper, WC, RP