20 replies to this topic

.phase online - bumps chat instead of displaying players in phase

.phase delete - has been removed

.gobj clone - sometimes cloned gobject will bug when you use .gobj move

Add more in the replies

.cast only works on yourself; you cant use .cast on npcs or other players

.ph weather doesn't seem to work ie .ph weather rain 0 does nothing. (Annoying in zones where it rains and it comes through the build)

Caching is still a problem. The cache folder fills up rapidly after loading a handful of phases (~30-50mb in size), which then causes long loading times when teleporting or re-entering a phase via .ph join.

This is further compounded when clearing cache and loading phases for the first time. There is a long pause where commands are frozen and chat is delayed until the phase fully loads, sometimes of upto 5 minutes or longer depending on the size of the phase and gobjects in that zone.

.gob multispawn makes all of the gobs spawn in one spot on one another

I have the upmost respect for Dread and the staff, I am not complaining, just adding onto the list as requested. Hopefully everything can be fixed in due time

Unsure if this is a 7.3.5 related problem specifically but it's a pain regardless

.ph online can be fixed by disabling rph helper or plus or minus or whatever that addon is

.ph online can be fixed by disabling rph helper or plus or minus or whatever that addon is

i dont have that addon so youre out of luck buddy

Effectively Banned by Self Proclaimed Moderator

These are easily fixed by simply re-joining the phase, but when added together with other bugs mentioned here, that can lead to quite the waiting time.

I don't know if this was mentioned, and I think a patch came out for this, but certain legion objects are still missing, as in invisible.

i dont have that addon so youre out of luck buddy

I see nobody has mentioned it yet and since I've already made almost 5 threads about it, hell let's add this one to the pile: waypoints are also still broken, both the old ones prior to the update and the possibility to make new ones.

I miss my waypoints, it's been almost a year

when i use .mod vis it wipes my chatbox from the past like 5 minutes, same with .ph online

confirmed to be the god of roleplay through intense divination

There's a few bugs I've encountered, I'll edit this later. I am however curious on what exactly could be causing .ph online, because it works for me just fine after I disabled that part of the addon. But if it's bugged even without the addon, I'm not sure what the issue could be.

NOTHING else would do this except the "reduce chat output" options. Do /L and use it. @ Nortwin @THE traius. Those commands aren't broken, y'all just suck.

NOTHING else would do this except the "reduce chat output" options. Do /L and use it. @ Nortwin @THE traius. Those commands aren't broken, y'all just suck.

and youre gay justin 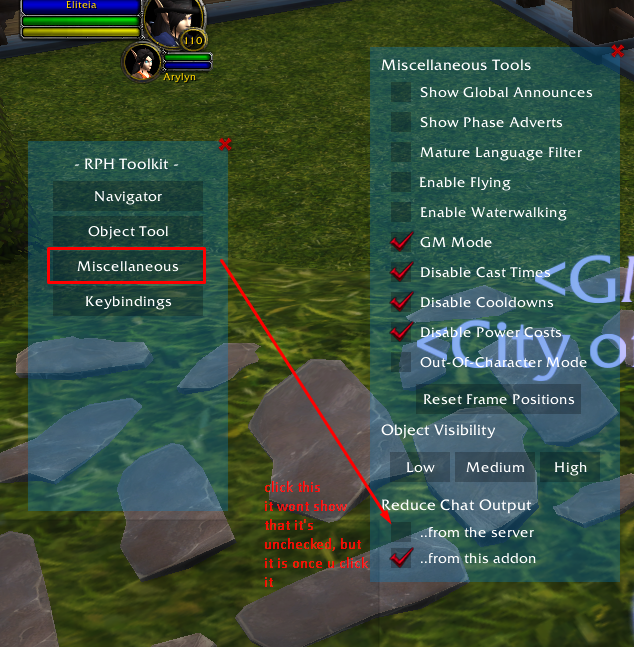 I'm surprised more people haven't been asking for the .wp commands to get fixed. NPC scripting is a decent work around until it gets fixed but is way too clunky to replace the quick, easy, and intricate paths you can make under the waypoint commands. Plus I need it to fix my phase very badly lol

Back to Bob's Toolbox